On Washing Trump’s Feet–Or Kissing Him 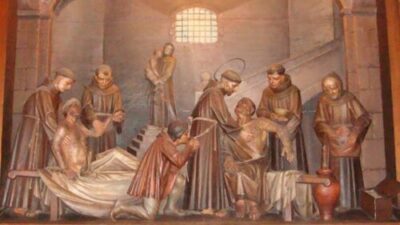 I rarely, rarely watch night time news shows.  I find them annoying and predictable.  Sometimes, though, predictable is what I want.

The other night, I watched a steady stream of CNBC news shows. I tuned into three shows for a total of about three hours.  Righteous anger and indignation, like incense at high worship, filled the airwaves, with gospel exhortations non-stop, from “Anyone paying attention saw this coming!” to “This is what you get when you elect a President like this.”  It felt great.

Up to last week, I’ve had no animosity toward Mr. Trump, only deep sorrow and frustration.  But I have to admit that the last few days I’ve come to hate him. And the barbarians who invaded the Capitol. And those Christians who carried “JESUS” banners, sang hymns during the siege, and justified the chaos. I want them all punished, to the maximum allowed by law.  No, I take that back. Beyond the law. Up to last week

Then I read this tweet by the novelist and essayist @annelamott, who over the last few years has released an avalanche of criticism at Mr. Trump.  But in a tweet on January 12 she said,

I hope Trump and his kids go to prison. But God loves this gross, violent, insane man. That’s the mystery of grace. I’ve said I’d wash Dick Cheney’s feet and I know he’d wash mine; while I’m not there w/Trump yet, I’d get him a glass of water. God and the pope would. Biden would.

We are suffering through an era when every thought, word, and action has to answer to the bar of justice.  And once we’ve determined what is just, we proclaim our verdict to the world (because, after all, if you remain silent, you are simply justifying the status quo), and righteously condemn the guilty to their just punishment (from being publicly ridiculed, to losing their platform, to going to jail).  We’re especially energized when the facts seem indisputable; then we can really let our righteous torrents fly.

I said we are “suffering” through an era of justice.  And I chose the word deliberately.  To be sure, I’m deeply grateful that we’re more alert to all manner of injustice in our nation and world. But when justice is the only song we sing, it begins to feel like a funeral dirge; it makes the world a scary and depressing place. As much as I enjoyed my righteous hate fest the other night, I felt a little sick when I shut off the TV.

Make no mistake. I’m the guy who said a year ago Trump should be impeached. Nothing’s changed. I’ve directed a fair amount of commentary against the idolatrous behavior of the Christian right. I stand by my remarks. Like most Americans, I was horrified by the violence let loose at the Capitol.  I think anyone guilty of breaking any laws on January 6, starting at the top, should be prosecuted.

But I’ve concluded that I must also be willing to see these guilty with the eyes of mercy.  Mercy without justice is mere sentimentalism and will destroy a community. Justice without mercy is soulless, and will do no less.

To put it in political terms, Abraham Lincoln had it right as the Civil War was coming to an end.  That conflagration was surely justification for stoking the embers of bitternesss–my God, the suffering and death caused by the obstinate South is still difficult to fathom. But Lincoln would have none of it.  In his second inaugural address, he concluded,

With malice toward none with charity for all, with firmness in the right as God gives us to see the right, let us strive on to finish the work we are in, to bind up the nation’s wounds, to care for him who shall have borne the battle and for his widow and his orphan–to do all which may achieve and cherish a just and lasting peace among ourselves and with all nations.

What does charity/mercy look like in regard to Trump and all those who encouraged or abetted the rioters, as well as the rioters themselves?  I’m groping for an answer.  Lamott’s biblical allusion gets me part way there.  If Donald Trump were to show up at a Maundy Thursday service at a church that practices footwashing on that holy day, and I ended up right behind him in line as we went forward, so that I would have to wash his feet—well, I’ve need to get to the place where I would do that not only because it is my Christian duty, but because I loved him.

I think my aversion to this imagined scenario (let alone the real thing) is perhaps not unlike the disgust Francis of Assisi felt toward lepers.   In an arresting passage from Thomas of Celano’s First Life of St. Francis, we read,

… he said in his Testament: “When I was in sins, it seemed extremely bitter to me to look at lepers, and the Lord himself led me among them and I practiced mercy with them.” So greatly loathsome was the sight of lepers to him at one time, he used to say, that, in the days of his vanity, he would look at their houses only from a distance of two miles and he would hold his nostrils with his hands. But now, when by the grace and the power of the Most High he was beginning to think of holy and useful things, while he was still clad in secular garments, he met a leper one day and, made stronger than himself, he kissed him.

12 Responses to On Washing Trump’s Feet–Or Kissing Him